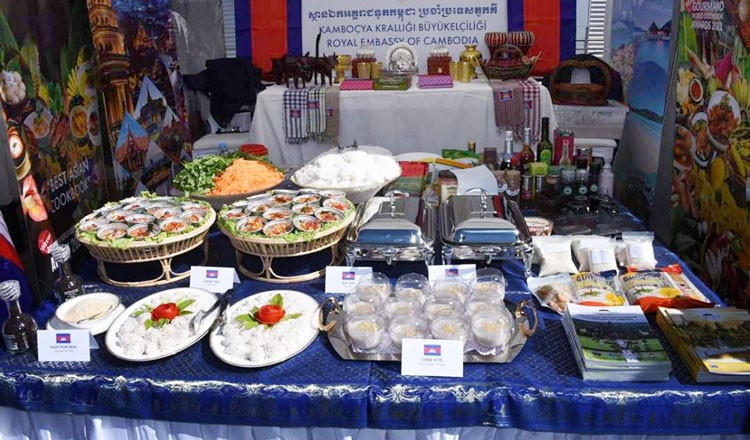 Cambodian cuisine received a lot of attention and praise from the guests, noted the Royal Embassy of Cambodia in Turkey.

On September 23-24, 2022, the embassy participated in the World Cultural Festival at Ankara Cermodern Culture Centre under the theme “Together, is Better Forever.”

Many journalists came to cover and record the activities at the Cambodian booth, while the majority of them were also interested in the made-in-Cambodia products, said the embassy this evening.

At the World Cultural Festival, the embassy exhibited art pieces, souvenirs, products made in Cambodia and prepared food and dessert for tasting as described in the cookbook “The Taste of Angkor” such as Fish Amok, Kampot Rice Noodles, Mi Kola, Banana Tapioca Porridge, Mung Bean Rice Cake, Sweet Corn and Sago in Coconut Milk, and also provided videos from Ministry of Tourism on Cambodia Tourism in as well as Gastronomy in Cambodia for screening at the event.

According to the embassy, the festival was organised by EBRISEM in collaboration with the Mayor of Malatya and the Yunus Emre Institute and with the participation of 30 countries. The programme focused on gastronomy, traditional dance, traditional fashion and music, intro videos about countries and display of art pieces and products from various countries. AKP