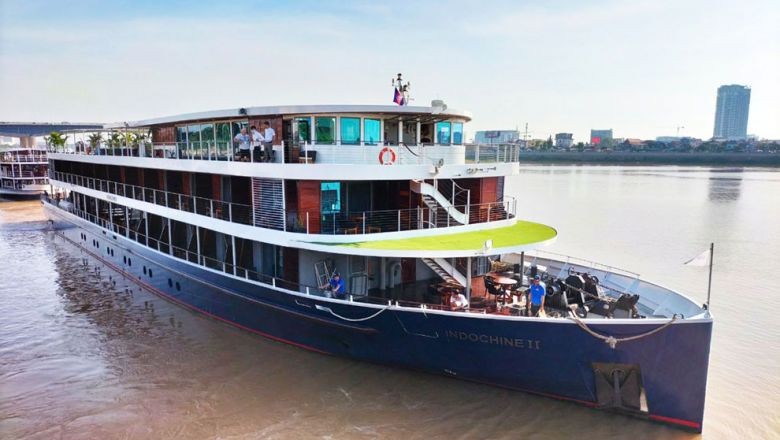 Cambodia's recovery from Covid-19, underpinned by the successful implementation of health and administrative measures, prompted the government in November to allow a broader resumption of socio-economic activity.

Since reopening last year, the Kingdom has encouraged international visitors to return by scrapping quarantine measures, among others. CroisiEurope, one of the world’s largest river cruise operators, has resumed its operations on the Mekong River, and was welcoming domestic and international tourists to experience life on the river between Cambodia and Vietnam.

Phan Sopen, a representative of CroisiEurope, said the company restarted cruising the Mekong in early July, with two vessels initially being designated to the route.

He said the two ships arrived in Phnom Penh on the night of July 23 and the morning of July 24, with one bound from Vietnam’s Ho Chi Minh City to Siem Reap, and the other sailing the reverse route. Docking in Phnom Penh gave the nearly 90 international tourists – mostly from Australia and New Zealand – a chance to visit the attractions of Phnom Penh.

Naidah Yazdani, Asian director of CroisiEurope, said Cambodia is the first country to allow fully vaccinated tourists to enter without testing, a massive boon to the tourism sector. His company is committed to promoting Cambodia’s cultural and natural treasures and letting the world know that the Kingdom is open for business.

“CroisiEurope partners with many countries, including the US, UK and France. We are constantly promoting attractive destinations such as our Mekong route, which has great potential. We will do our best to attract more visitors to Cambodia,” he said.

Yazdani said the firm had suffered great challenges over the past two years, with the collapse of virtually all international tourism. It was only thanks to the financial support of the parent company in France that they were able to maintain their vessels and retain some staff.

He added that in the first year of the pandemic, the company had tried to keep as many of its employees as possible. After a year, it had no choice but to let some of them go, as it had no way of knowing how long the crisis would last. On a positive note, he said the layoff enabled the employees to seek other jobs or visit their families, which is rather difficult when working on cruise ship.

He said that during the worst of the outbreak, several ships were stranded in the oceans and rivers of the world. Four of CroisiEurope’s cruise ships were stranded in Vietnam. Despite the intervention of the French embassy, they were unable to disembark their passengers. Fortunately, when the company contacted the Cambodian government, it received a quick response and the cruise ships were allowed to return to the Kingdom so that tourists could fly back to their home countries.

The same government’s recent remarkable gesture of an extended three-month tax break for the tourism sector is another much-needed boost to the industry, which would need a long time to recover to pre-pandemic levels otherwise, he added.

“They are doing as much as they can to facilitate a return to full tourism operations as soon as possible,” he said.

On July 15, the Cambodian government issued a press release detailing additional relief measures to mitigate the impact of the pandemic and support the recovery of the tourism sector. Three main measures were announced.

Exemption of all taxes bar VAT was announced for all hotels, guesthouses and travel agencies registered with the General Department of Taxation (GDT) that conduct business activities in Phnom Penh, Siem Reap or Sihanoukville for an additional three months, from July to September. These businesses remain obliged to file tax returns and use an e-system to manage VAT during this time, however.

Second, all debt owed to the government at the end of 2019 would continue to be frozen. There would be a continued penalty exemption for tourism businesses.

Finally, tourism businesses were encouraged to organise professional development courses for their employees and may request financial support from the government’s Skills Development Fund for this purpose.

Noriye Oto, a tourist from the US state of California, came ashore at Phnom Penh from one of CroisiEurope’s cruise ships. She said cruising the Mekong is safe and there are plenty of beautiful natural sights. It was also very interesting to see the lives of the people working and living along the river.

She added that cruising on a ship is very relaxing and a great way to see different scenery while travelling from one place to another. Seeing each different sight with her own eyes was the best way to understand a new place, she said.

“I think more tourists should visit Cambodia. If they want to relax, watch the fisherman along the river and learn about the development of Phnom Penh; cruising is the way to go. Of course, a major highlight is that you’ll get a chance to visit the majestic Angkor Wat, one of the wonders of the world,” she said.

She encouraged all tourists to visit Cambodia along the Mekong and Tonle Sap rivers because the Cambodian people are very friendly and hospitable, the food is great, and the government has well and truly rolled out the red carpet to tourists.

Steven Baron, a tourist from Australia’s Melbourne, said he was fascinated by the scenery along the Mekong River from Vietnam to Cambodia. But because he had just visited for the first time and had not visited many places yet, he did not have much to say.

“I think Vietnam and Cambodia are good destinations for international tourists to visit. They both have fascinating cultures, incredible food, and the people are very friendly,” he added.

Tourism ministry spokesman Top Sopheak said the Mekong River has the potential to become a major attraction to visitors to the Kingdom, especially since the ministry had ended the complicated requirements that were in place during the peak of the pandemic.

Sopheak added that many tourism services along the Mekong River had been suspended for a while due to the lack of tourists, but now were gradually resuming operations.

He noted that in the first six months of 2022, more than 500,000 international tourists visited Cambodia, an increase of more than 300 per cent compared to the same period in 2021. The number was still 80 per cent lower than pre-pandemic figures.

In 2022, he estimated that Cambodia would receive between 800,000 to one million international tourists, although some uncertainty remained.

Although Cambodia reopened in November last year, international tourism around the world remains largely inactive. The Kingdom received about 5,000 tourists a day in July.

Sopheak said domestic tourism has largely returned to normal, with between 250,000 and 300,000 visitors travelling each weekend. Last weekend was quieter, largely due to stormy weather and some flooding.

“The momentum of the tourism industry’s recovery will be gradual. If there are no more shocks to the sector globally, by 2025 we may recover to the 2019 levels. Of course, it may be 2027, as nobody can predict international developments in times of uncertainty,” he said.

He said Cambodia has made it easy for tourists to travel to the Kingdom by scrapping quarantine rules. Tourists who have been fully vaccinated are not required to test, while the unvaccinated must take a rapid test upon arrival.

He added that the Kingdom’s management of Covid-19 also ranked better than many other countries. The prominent Japanese-run Nikkei Asia news magazine recently ranked Cambodia No1 in the world for its recovery.

Van Kunthul, a local tour guide, said that although the cruise takes several days to meander from one section of the Mekong to another, the passengers do not get bored. The company runs different programmes for tourists at each of its ports of call. In Phnom Penh, for example, visitors can visit cultural and historical areas. In addition, they visit different villages along the river, learning different things at each one.

“Through travelling the river this way, they encounter the reality of the lives of the Cambodian people who live in a natural way, fishing and farming along the Mekong River,” he said.

He noted that most of the cruise ship’s passengers came from developed countries such as the US, France, Australia, or New Zealand, while there were very few Asian cruisers. 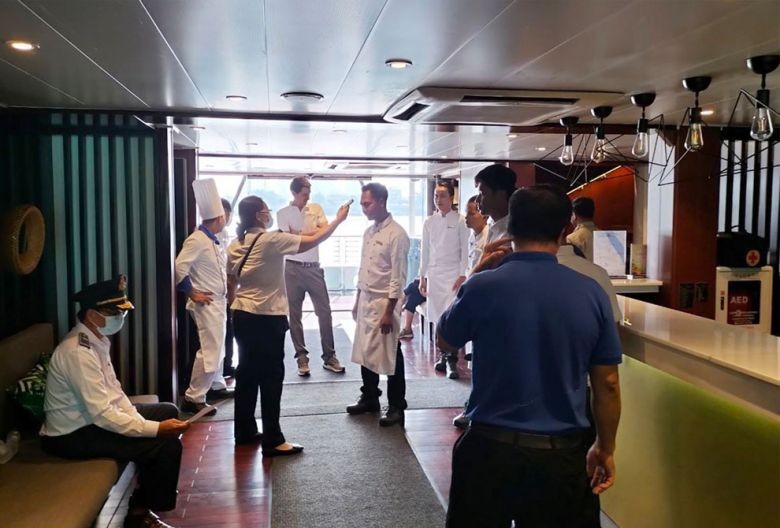