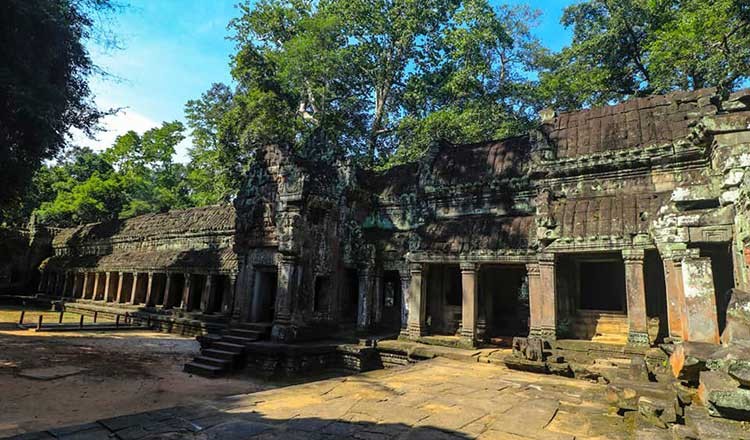 Ta Prohm temple’s Hall of Dancers in the Angkor Archaeological Park has been restored and an inauguration ceremony was held to open the area for the public to visit.

The ceremony took place on Sunday afternoon in the presence of Jagdeep Dhankhar, Vice-President of​ India, and Phoeurng Sackona, Minister of Culture and Fine Arts.

Chan Lay, manager of the Ta Prohm temple restoration programme, said that the dance hall was restored by a team of experts from India in cooperation with the Apsara National Authority (ANA) and was repaired in two stages.

The first stage began in 2010 with excavation of the site then repairs commencing in 2012, while stage two began in 2017.

“Renovation of the Hall of Dancers has been smooth with beautiful results, but according to the plan, experts left some parts untouched and remain in their original condition because they act as a tourist attraction,” he said.

He added that the dance hall was just a pile of stones before restoration work began and the roof of the hall had almost completely collapsed, while the pillars had collapsed to the ground. The restoration team had to meticulously remove and number each stone to facilitate the restoration work.

Long Kosal, ANA spokesman, said yesterday that Ta Prohm Temple has taken about 12 years to restore by the International Coordination Committee or ICC-Angkor expert team, relevant technicians from other countries, and the authority’s workers.